Getting Dirty in Idaho

In June of 2009 Ms. Daryl Swanstrom, a member of the Washington College Board of Visitor’s and Governors, invited Stewart Bruce, Josh Biringer ‘12, and Samantha Bulkilvish ‘09 out to her 44 acre ranch in Vasser, Idaho. On the ranch she raises beef cattle and chicken and hopes to, one day in the near future, get her ranch certified organic.

The team’s goal was to collect data that would help her better manage her growing ranch. The team spent the week using GPS to take waypoints, videotaping, and taking pictures from every corner of the ranch. Using GPS they mapped such things as the wells, springs, and other water features. They also took many videos of the ranch to document what they saw with plans to link the videos to the finished map. This way Ms. Swanstrom could show her Ranch to anyone in the world. They also used GPS to map the trails, roads, utility boxes, her house, and barns.

Upon her return to the GIS lab, Samantha was tasked with sifting through all the data collected. She spent hours labeling the videos and pictures so she would know which GPS points to hyperlink them to. She also digitized the streams layer, received from the Latah County, Idaho planning office to better fit the aerial imagery. Samantha also linked the forestry plan, given to her by Ms. Swanstrom, to the digitized forest stands. At the beginning of the Fall Semester she received additional help from Dalbir Kaur ’12 and Lisa Jones ’11. Dalbir started digitizing the land use within the Swanstrom Property but soon finished and moved on to the land use of Latah County. Lisa has stepped in to finish hyperlinking videos and pictures and to clean up the rest of the GPS points and other features added to the map. As of October, Ms. Swanstrom received a draft copy of her map which she can view in ArcReader. She plans to use her new mapping tool to come up with a strategic plan for the future development of her ranch. 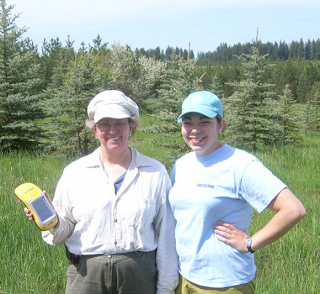 Daryl Swanstrom & Samantha Bulkilvish ‘09
Posted by GIS at 11:36 AM No comments:

A Walk in the Past: Following the Revolutionary
Foot Steps of American & British Soldiers

As many know, Maryland and Pennsylvania are full of historic battlefields and footpaths that American and British soldiers used during the Revolutionary War. Gettysburg is one of the most popular spots, but what about the others? What do they look like? How did the fields and paths appear to the soldiers hundreds of years ago? Professor Bruce and Otto Borden ‘13 set out to answer these questions with their 3D rendition of these historical sites. Their goal was to recreate the fields as they looked during the war and place 3D soldiers to move around the maps, in order to show the paths that they took.

This project involved the use of Google Earth to create this sequential tour of the movement of both American and British forces during the battle of Brandywine. The research involved finding websites for townships and counties that were involved in the battles. Otto used their historic sites to gather information about what happened in the battle and replay that information back in order in Google Earth. Historical maps were found on the internet to ensure that the placement of the troops was correct. This project was challenging, but rewarding, says Otto Borden.
Posted by GIS at 11:32 AM No comments:

Kathy has completed the Chamber of Commerce street map and resource guide. A graduate summer intern made significant strides with the map this summer. The map highlights points of interest in the Kent County area. You can see an example of our work in the Chamber of Commerce Office in downtown Chestertown on the Corner of Maple Avenue and Cross Street.
Posted by GIS at 11:28 AM No comments:

Where is GIS Taking You?

Lawrence went to Rock Hall Wildlife Refuge to help plant oysters into an artificial oyster bed. The bedrock went across an eighth mile wide cove in the shape of a “C” to help fight against waves. The team that he worked with placed oysters onto the bedrock by hand in chest deep water. Afterwards, they used a Garmin GPS to mark waypoints along the bedrock so they could project an image of the “C” in ArcGIS.
Posted by GIS at 11:29 AM No comments: