Andrew Newell is doing his class project on a bathymetric analysis of the Chester River and was having trouble finding the data from the NOAA site. There is this thing called ENC Direct and you can download vector files but it seems kind of clunky way to go about it. I did some more searching and stumbled across a cool site (http://www.ngdc.noaa.gov/mgg/bathymetry/hydro.html) where you can search for actual bathymetric surveys. I did a word search on Chester and instantly found digital versions of the 1846 survey of the Chester. Pretty cool. Later on that night I leaned there is also a web map search version which is oh so much easier then the text search I started with. I also found 1898 maps and 1940 maps that had actual digital xyz data. I thought this is exactly what Andrew needs.

Then I wondered if I remembered how to turn that into a 3d scene of the bathymetric data so I could quickly show Andrew how to do it in our weekly meeting the next day. This was about 9 pm. I went ahead and converted the xyz text into an excel spreadsheet and brought this into ArcView. I used the Add XY event tool and created a point file. Then I used the point to IDW raster and made a raster image of the points. I brought this into ArcScene and then used the option to layer the raster surface against the z values for depth. This should make a cool 3D surface.

It did not work. I used a vertical exaggeration rate of 5 as this is what I had been using when I did the same 3D surface when I used elevation data on the area around campus. I tried several things, redid the entire process and even used the online help to see if I was doing something stupid. Well finally after a few hours I figured out that I need to make the vertical exaggeration 200, not 5. Victory! 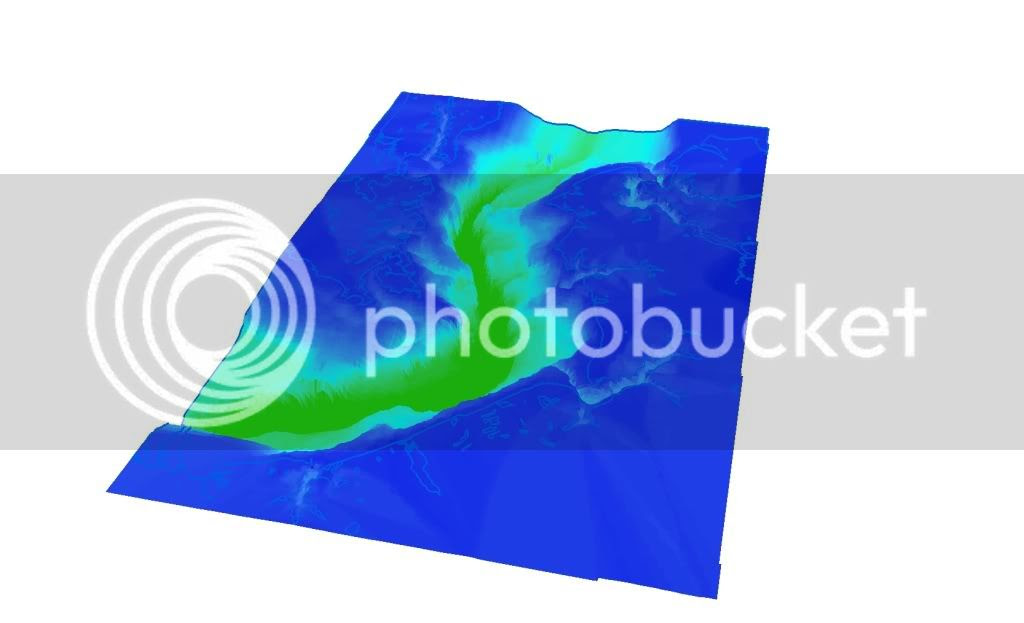 The other interesting thing to realize is that the latest bathymetric survey of the river dates from 1940. We can also digitize the older surveys and look at change in depth over time. This will be a lot of work so I suggested to Andrew the next day that he do one small area as a pilot project and future students can pick up where he leaves off. While I don’t think Andrew will get a chance to do this when we get the prototype Argus unit (http://argus.survice.com/) on the Reinell we can then track the same survey line that they did in 1846 and compare depth change from 1846 to 2010. That is change over a 164 year period. Should turn out to be very interesting indeed.