On the River Again

Spring has sprung and the weather finally got nice enough to take the old pontoon boat out on the water so we could start collecting data for our GIS on the Chester project. Our new donated boat, a 22 foot Reinell, is trapped at Handy Point Marina by sailboats until they put these boats back in the water. We boated right past the new CES research vessel with envy in our eyes and decided to head up river since it really was kind of windy. John Anderson, Matt Stiles and I were on board with Andrew Wright acting as Captain. It felt really good to be back on the water after a long and blizzard like winter.

Matt needed to collect images of docks for his class project and John was looking to get some images of historic homes from the river for his river tour guide map project. I brought along our really cool Ricoh camera with built-in GPS so we could collect images and GPS points. The Ricoh camera is nice but the GPS Photo Link software that goes with it allows you to simply take a picture and after you process it the software creates a shapefile with a hyperlink to the image already for you saving hours back in the lab. This means more time for us to do fieldwork of course. John brought his own camera but had no way to record what he was taking so he used the Ricoh too. I think his camera may be better but it doesn’t have GPS.

It was a little chilly but we all had jackets. Next time we need to take hats as we all got red faces from sunburn. Just because its cold doesn’t mean you don’t get sunburn. Andrew used the boat hook pole to check depth so we did not mess up the new propeller on the new engine. We had to cycle the new engine to break it in so we took a rather lazy track up river. We saw lots of Osprey nests and one Bald Eagle nest where we could see the white head of the eagle. And we saw a small herd of deer swimming across one of the small creeks too but too fast for us to get a picture. The map shows our route and we plan to make one of these maps every time we go out on the river so check back on our progress. 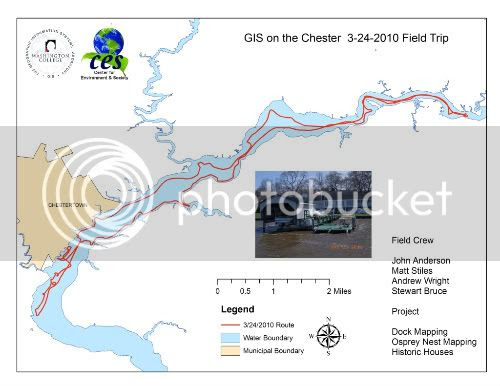 When we finally got back to the boathouse the rowers were out and so was the Sultana so we did a little diversion to check these out. (These are the little circles on our route map) We ended up down at the yacht club and used our video camera to record the marina there. A single picture won’t do justice to any of the marinas so we decided to video tape all marinas. It is interesting now that most of them are empty with all the boats on shoppers. We will redo the videos at the peak of summer so we can see the contrast.