A Day on the Water

First day of hands-on field testing! My project for this year has been focused on water testing; in addition to collecting existing data from sources like USGS and the Maryland DNR, I'm hoping to set up a water testing network for GIS and Washington College students to use in the future. You could consider this my "beta testing stage," in a way - by going out and actually doing the water testing, when I write up my instructions for students to come, I can include details on what worked and didn't work. 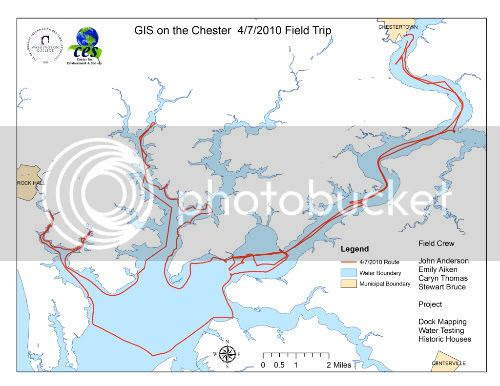 We got an early start... VERY early, by college student schedules! I was up and in the chemistry lab at 8:15 AM to pick up the testing kits & other supplies, and by 8:45 we were headed down to the boathouse. We didn't get back until late afternoon, 5 PM or so. I was surprised that we covered so much ground, because I wasn't expecting to get too far beyond Cliffs City, but we got a lot done in one day. It was a beautiful day on the water: we were moving fast enough most of the time to have a pleasant breeze, but when we stopped it would warm up fast.
This was only my second time out on the boat, but this time we were well-equipped with lunch, drinks, sunscreen... All the essentials. Not to mention the water testing supplies, and my safety goggles and gloves, since I actually did all my testing and analysis while on the boat. When you're handling acids on a moving vessel, you want to make sure that you have all the appropriate gear on hand. Safety first! One of the nice things I discovered about the pontoon boat is that you can collect water samples by just laying on the end of the boat and sticking your arm in the water, which is very convenient, if a little funny-looking. 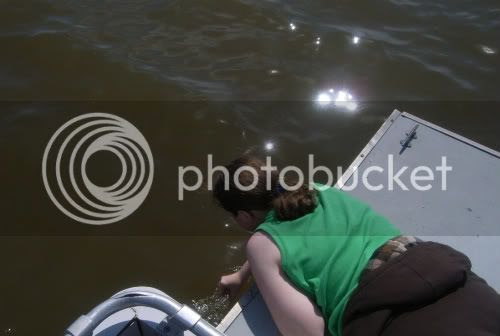 An interesting note about water sampling - one of the most important tests we performed, dissolved oxygen, is very finicky. It must be performed as soon as possible after the water sample is taken. Fish and other aquatic organisms need oxygen just like we do, and they rely on the oxygen dissolved in the water in order to breathe; too little oxygen in the water can result in a "dead zone" where nothing can live. But exposing a water sample to air for too long can change the amount of dissolved oxygen in it, and that's bad for your data. So that's why it was so important to do the testing on the boat, rather than waiting to do it on solid ground. Overall it worked pretty well.
Caryn and John met us at Cliffs City, and we spent the afternoon photographing historic houses, docks, and buoys. If you look at the map up above, you'll see a few places where our path doubles back on itself, or goes around in circles. That was us trying to get good photographs of all the buoys! A lot of them had writing on them, labeling special harvest areas and such. Stew thought it would be a good idea to get close-up photos of that writing. That way, we'd have the GPS points, and we would know what the buoys meant just by looking at the pictures. But sometimes it would take a few tries to get the angle just right... and sometimes we would just run into the buoy. Oops.
After plenty of exploration - you can see from the map that we almost made it to Rock Hall - we dropped Caryn and John off at Cliffs City again, and headed for home. I took one last water sample along the way home, and then we were done for the day. I'm hoping to get the chance to do this again soon!
-Reported by Emily Aiken '10
Posted by GIS at 1:01 AM