Over the summer the GIS lab embarked on a new and exciting project. This project brings the entire Washington College campus into the virtual world. Using a variety of programs such as Google SketchUp, Google Earth, Digital Photos, ArcMap 10 and Geoweb 3D, the lab is creating an accurate 3D visualization of the campus. The picture to the right is a detailed in-progress snapshot of the campus with accurately modeled buildings, call boxes, light post positions, and trees displaying the correct tree species found throughout WC.

Based on photos of the campus the GIS interns use SketchUp and create the buildings from the ground up to create a detailed, accurate model. Then, using ArcMap and data collected by previous interns, the students bring in detailed point fi les of tree and light post positions. The components were then brought together in Geoweb 3D to create a virtual campus. The GIS lab will use this project to give virtual tours of the campus, shows its appearance at different times of the day with different lighting levels, and even to model its development over the years. All of this brings the campus into the future. 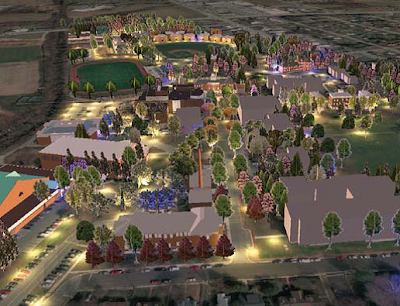 WC Campus in Geoweb 3D as it looks today with accurately modeled buildings, updated call box and light post positions and the correct species of trees found throughout WC.

Example of an unfinished building in Google SketchUp.
Posted by GIS at 12:32 PM