Mapping the Past: The Surveys of George Washington - A Lecture Presented by Washington College

In conjunction with Mr. Redmond’s lecture, an exhibit of approximately ten of George Washington’s maps will be on display in the William Frank Visual Arts Hallway of the Gibson Center for the Arts. This exhibit will available for viewing from February 18th- 26th, 2012. The maps that will be displayed range in years from 1748 to 1793 and are all maps that Washington himself drew, from one of his first maps, or Lawrence Washington’s turnip garden at Mount Vernon, to land surveys and a few maps depicting his estate at Mount Vernon. Accompanying each of the maps will be a short description of the map as well as a locator map to give the viewer a better understanding of the location of the area.

Can’t make the lecture? Don’t fret! In making the effort to make this wonderful lecture available to a broad audience, the entire lecture will be streamed live online through a webcast at http://live.washcoll.edu, which is provided by the Office of Information Technologies at Washington College. The program will begin at approximately 4:50 PM on February 22nd, 2012. By making this lecture available to the public and online, we hope that Mr. Redmond’s lecture will be an enjoyable experience for all. 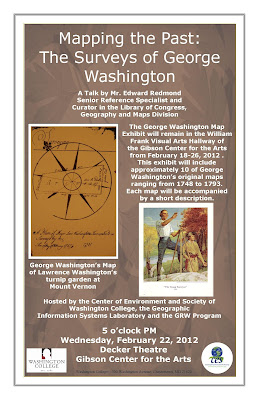