Last August, the GIS lab moved from our former space in Goldstein Hall (730 square feet) to an off-campus location nearly three times its size, and we wondered how we would use all the new space. It’s hard to believe it now, but the new office originally had only two student work areas. That thought is a distant memory today. The office now has four student work rooms and houses our plotter and 42” flatbed scanner. It hasn’t even been a year yet, but we’re already finding ourselves in need of new student work stations.

The first part of the office to be converted was the back storage room. Shortly after graduation, work commenced to consolidate storage, prepare and paint the walls, add electrical outlets and network outlets, install a drop ceiling, and lay new carpeting. Just to make things even more interesting and chaotic, we also installed a 12000 BTU air conditioning unit and a backup generator for our server room. 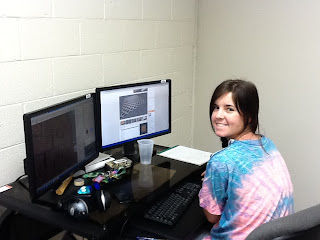 With 22 students working at the lab over the summer, even that wasn’t enough. More recently, we converted what was once our conference room into another student work area. The lab continues to hire more students, but the only space left in our new office is the kitchen! How will we have enough work stations in the fall? Acquire more space, of course! 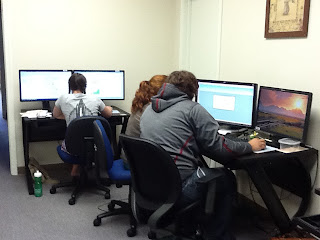 We’ve just begun expanding into the space next door to our existing office by signing a month to month lease to rent an additional 440 square feet. On July 13th we met some great folks at an undisclosed Maryland State agency about a new $200,000 grant that will require additional space acquisitions. Thanks to that grant (if we really get it), in addition to new space we just signed a lease on, we will need to house two more staff and eight students. We also have plans to create an employee lounge where students (and hey, staff too) can take their lunch breaks. And to be clear, no grant funds can be spent on the employee lounge though. The extra space will also give student employees more flexibility in choosing their work schedules once the academic year begins. 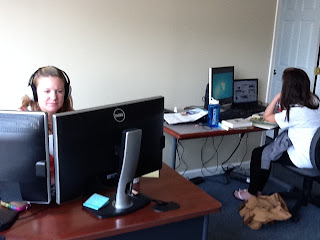 Student opinions of the new space are very positive. For most, the extra room more than makes up for the minor inconvenience of having to leave campus for work. Luis Machado ’13, who worked for the lab when we were still in Goldstein Hall, says, “The new office is a lot bigger. There’s a lot more space to get work done.”

Steve McFall ’16 wasn’t here to see the old office, but he likes the new one. “I’m excited to see how the expansion goes. I think it will give us plenty of room for everyone in the fall,” he says.

Erin Cooper ’14 likes the new office for a different reason. “I like that the new office is so open,” she says. “I think it’s good for everyone to be working together in the same place. It’s really helpful to have a bunch of coworkers around to get advice from if I run into problems with a project.”

We’re all really excited to see what the space will look like in a few months as we continue to grow and we will take pictures of the newest proposed space before we move as the that new space will have to be totally gutted before we move in. According to Stewart Bruce, GIS Program Coordinator, “I didn’t think we would so quickly fill up this space but at the rate we are going who knows what space we will need two years from now?”
Posted by GIS at 11:23 AM