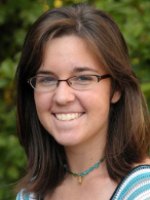 Have you ever wanted to learn how to perform 3D sketches, but figured the software would cost too much or the classes would be outrageously expensive? Unfortunately, this is usually the case for most people. Jessica O’Brien has discovered that this is not so at Washington College.

“The best thing about the software we use is that it’s available for free - anybody who wanted to sit down and learn could. That surprises a lot of people. When you tell someone you are modeling a building virtually in 3D, then placing it into a gaming platform, they automatically think programs which cost big bucks, but that's not the case,” said O’Brien.


A junior at Washington College, O’Brien is a Computer Science major. She is in her second year of working in the GIS Lab, currently leading the Unity Team, the ultimate software tool for video game development, architectural visualizations, and interactive media installations. “I was originally hired to do sketchup, but ended up working on the Virtual World’s project within a month because of my Computer Science major skills.”
Her focused Unity project is the ECI Project. She and her team are building a 3D Model of the Eastern Correctional Institution in Google SketchUp, adding textures in Autodesk 3DS Max, and importing the model into Unity to create a virtual version of the prison. This will be a visual way for the prison guards to organize and access important information about the prison.
Work on this project led O’Brien to the USGIF Tech Days 2011 conference in VA to demonstrate the beginnings of the ECI Unity project. “We attracted a lot of attention and our project was different from nearly every other booth display there.”
It is obvious that WC GIS is unique in its field, not only to others, but the internal network of student interns as well. “Open source software gives small groups like us the chance to compete with much larger corporations. We can hire more students to get the project done quicker and more efficiently. The students do most of the work in the lab. It not only gives us great experience with the technology and working processes, but it creates an atmosphere of collaborative learning outside the classroom,” said O’Brien.
This October, O’Brien will be a member of the WC GIS team traveling to Orlando for the GEOINT 2012 Symposium, where she will be presenting a working version of the ECI Unity project created in the lab. “It’s come a long, long way from the outdated floor plans we started with. I'm proud of how well this project is turning out and so grateful to everyone on the team who has worked on it.”
Posted by GIS at 7:28 AM