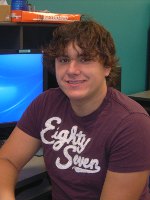 Most GIS interns didn’t get their start until they began studying at WC, but for freshman Stephen McFall, his experience with GIS technology began many years before.
A native of Smethport, PA, McFall has followed Stewart Bruce in his studies of GIS. “I first got involved with GIS in the summer before starting 7th grade. My local 4-H educator had suggested a GIS camp held at Penn State. It was the first time I had ever heard about GIS and I thought it was the most interesting technology ever.” Stewart Bruce was hosting the GIS camp that summer, and the next year he moved to Maryland to teach GIS technology at Washington College.
Click to read more...

Even though the GIS summer camp would now be 7 hours away, McFall continued to make the trip to Chestertown for 3 additional years. After years of experience at the camp, he decided this is something that he would like to continue, and in the summer of 2012 McFall was hired as a GIS Lab intern.
His experience with GIS technology literally led him to Washington College. Now as a freshman Anthropology major, he continues to grow in skill as a GIS intern working on projects such as the ECI Project, building a 3D Model of the Eastern Correctional Institute in Google SketchUp to create a virtual version of this prison. He has also used SketchUp skills in the Four Seasons Development Project and ArcMap work with a mobile map of the campus.

McFall was also among those interns who attended GEOINT 2012 in Orlando. He accompanied Stewart Bruce and senior Mariah Perkins on stage to receive the Academic Achievement Award, especially significant considering McFall’s achievements in geospatial technology coming into WC. Because of the college’s training, McFall won the national USGIF scholarship as a graduating high school senior and was given the opportunity to attend this year’s symposium as a member of the WC team.


"Attending the conference alone was an honor, I met with so many companies in the geospatial intelligence field who will hopefully be my future employer," said McFall.
As a veteran member of the team in only his freshman year, he is ready for whatever could be thrown at him and willing to take on any project. “I hope to work this summer at the camp and continue to work towards a career in GIS. While working in the lab I have gained so much knowledge about computers in general and I have gained very valuable networking connections. GIS technology is important because it shows how everything relates to one another. I am even using GIS skills for a current class project mapping out the campus for a mobile app.”