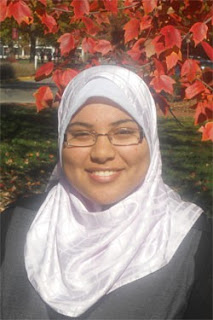 Each year students come and go through the doors of the GIS lab, but there are the faithful few who invest themselves into the grand vision of the ever-expanding lab and advancing innovative GIS technology. Senior Smaa Koraym has been dedicated in working within the GIS lab since August 2009 of her freshman year.

“I have been fortunate enough to work here for the last three and a half years. I have been navigating from one project to the next, from mapping health facilities to optimizing WC GIS curriculum PowerPoints,” said Smaa.

This year Smaa has collaborated her GIS expertise with that of fellow seniors Nich Tremper, Joe DeStefano, and alumna Sam Bulkilvish ’09 on the Maryland Conservation Training website. This website is a group effort between the Maryland Department of Agriculture, Upper Shore Regional Council, Green Earth Connection, WC Center for Environment & Society, and WC GIS lab. Through these websites, individuals have access to information as a resource for learning Best Management Practices on Maryland Farms, an effective and significant resource on Maryland’s eastern shore.

Earlier in her senior year, Smaa was chosen in a select group of interns to represent Washington College GIS at the annual GEOINT Symposium in Orlando.

“There I was able to explore the world of GIS and realize just how important this technology actually is to national security. I saw firsthand how it applied differently to Defense, Intelligence, and Homeland Security subdivisions. It was a really great experience and I would encourage anyone to do it, if they get the chance,” said Smaa.

“As of right now my life post-graduation can go one of two directions: Peace Corp or job hunting. Fortunately, both of these directions will eventually converge and lead me to my ultimate goal of entering medical school.”

Smaa has hopes of one day building a hospital in Egypt that would provide medical care to individuals who otherwise would not have access. Whatever the path she takes in life, her time at the GIS lab has undoubtedly provided her with the tools and work experience that is sure to open up doors for years to come.
Posted by GIS at 10:06 AM