GIS bridges the gap between Venezuela and America: Luis' Story 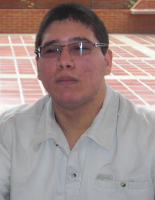 Students from all over the world come to study at Washington College, whether it is for one semester or four years. WC has study abroad programs at institutions all around the globe which provide excellent opportunities for its students. Luis, an Anthropology major with minors in Philosophy and English, is a four year international student originally from Venezuela.

During his time working at the GIs lab, he has not only worked on projects in the lab itself, but has also had the opportunity to pursue outside fieldwork. He worked in Easton mapping the storm-water system throughout the town. Luis was one of the few interns from the GIS lab who attended the GEOINT Symposium in November 2011. At this event, Luis had a chance to “wander around and mingle with some of the biggest names in GIS and government groups.” What an opportunity it was!
Click to read more...

The information used at GIS is important for individuals as well as organizations. When asked why GIS technology is important and useful, Luis responded,“I've worked with local farmers, local community members, other towns, police, and state projects all in the past year and half. I've made maps for some, analyzed data for others, and I've used multimedia and mapping software to make it approachable and understandable. There is simply too much information available to be of use unless you can filter it down to something manageable. GIS isn't just a valuable tool, it is an invaluable perspective on how and most importantly where things are happening.”


It is unclear what the future holds for this graduating senior, but the WC community wishes the best to him in his future endeavors.