Tyler is a senior from Chestertown, MD. He is a Biology major with a Chemistry Minor on the Pre-Med track. Tyler has worked in the GIS Lab since his freshman year and has had the opportunity to work on many different projects focusing on 3D visualization including: Chestertown Historic 3D, Easton Historic 3D, Washington College 3D Tour, Washington College in 1962, Queen Anne’s Conservation Project and the Pluckemin Artillery Contonment.


The project that I worked on during the fall of 2012 was creating a 3D visualization of a proposed development in Kent Island. The Four Seasons is an ambitious project that will create 1,350 single level family homes and multiple condos between the existing developments of Queens Landing and Cloverfield; it is a planned community for active adults 55 and over. The development is being proposed by K. Hovanian’s family of builders which have similar developments in California, Minnesota, New Jersey, Delaware, Florida, Virginia and Maryland. 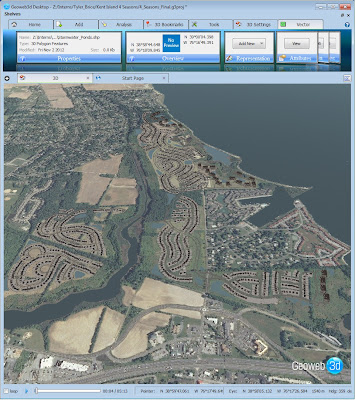 
My project was to create an accurate 3D visualization for the Queen Anne’s Conservation Association to help better inform the public of this planned development. This is because the land that the proposed development will be built on is pristine farm and waterfront land that is currently completely undeveloped.

For my part of the project I used a program called Geoweb 3D, a 3D visualization program, to create an accurate 3D model of what the proposed development will look like. I tied together work from multiple other students who created 3D buildings and ArcGIS shapefiles. The buildings and shapefiles were created with data received from Queen Anne’s County Planning and zoning; this allowed us to be accurate in creating the proposed homes and condos.
Another student and I placed each individual building on a point file that was created in ArcGIS so that each home and condo was inserted in the individual planned lots; the lots were outlined to show the extent of land use. Planned roads and trails were added into the scene to show how much land will have to be used to support transportation throughout the development. Planned storm water ponds and trees were added to show these additions to the development and to give the scene a more lifelike feel. A Chesapeake Bay shapefile was added and represented as water to bring the viewers’ attention to how close the development will be to the bay. This information was all tied together to create a final 3D fly through and multiple still images.
By tying all of the information together and inserting aerial imagery, a final project was created that shows an accurate construction of how Four Seasons will look once it is completely finished. This information can be used to make the public more aware of what these developers are planning to build in Kent Island and the possible impacts it may have on the environment, the bay and the ascetics of the area. 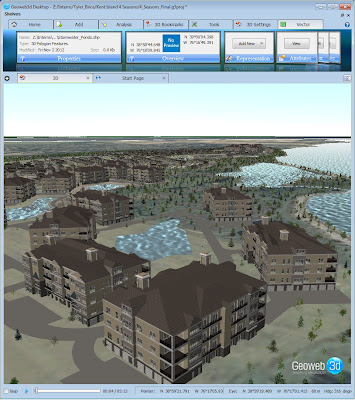 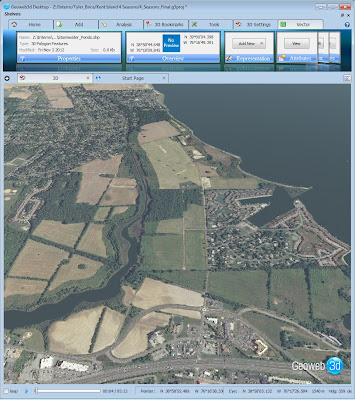