Classroom to Town: Youngest in Class Tackles Projects for Future Use 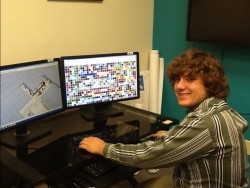 Stephen McFall is the youngest student currently enrolled in Intermediate GIS, a course taught on the WC campus by GIS Director Stew Bruce. Steve has been working at the WC GIS lab since he came to campus in the fall. Each student enrolled in the class is working on an extensive project that must be completed by the end of the semester.

Steve generally works on 3D projects in the lab as well as MapStory Foundation projects, but for this project he wanted to try something different. For his semester long assignment, Stew suggested that he compile information into maps to be given to the Greater Baden Medical Services. This seemed interesting, so Steve began working.

Steve decided to take the Intermediate GIS course this semester in order to further develop his GIS skills. Since he generally works with 3D projects or MapStory taking this course on campus was a good way to expand his GIS skills and knowledge. He said that the course has helped him with his other work in the lab.

Using Census, American Community Survey, UDS Mapper, and data provided by the health center, Steve is developing maps to make the data easier to analyze. These maps will have data on age, race, poverty, insurance, and medical data. Additionally, he will make predictions about what the data might show in the future.

The title of his project is “Greater Baden Medical Services”. The overall goal of this project is to have GBMS use the final maps to determine where areas of need are and how they can best be served. When the project is finished the maps will be presented to the GBMS staff.

This Anthropology major and Computer Science minor hopes to use his Geospatial Intelligence skills throughout his time here at WC and hopefully after graduation when he enters the workforce. He is planning to continue working at the GIS lab after the semester ends as a summer intern.
Posted by GIS at 6:00 AM