Analyst of Many Trades: Stephanie Ireland 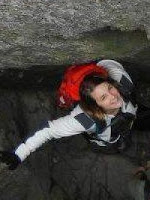 Stephanie is a Linkage Analyst in the GIS lab and works full time on the lab’s new “Spider Mapping” project, which consists of using IBM’s i2 software to create link charts that show connections between a variety of crime data sets. This project was put in motion at the request of Governor Martin O’Malley, and will soon be utilized by every police agency in the state as a tool for crime awareness and prevention. Stephanie is also an Imagery Analyst in the Navy Reserve, as well as a part-time student at Washington College seeking her BA in Anthropology.

Stephanie Ireland is a full time employee at the Washington College GIS lab and a part time student at Washington College. This anthropology major is currently enrolled in Intermediate GIS, a course taught on campus by GIS Director Stew Bruce. As part of this class, Stephanie worked on an extensive project throughout the semester in addition to her everyday work in the lab. With a little brainstorming help from Stew, Stephanie took on a project involving Lyme disease research.

Stephanie usually works on crime mapping projects in the lab, but she wanted to try something completely different for this project. Although the Lyme disease mapping was Stew’s idea, Stephanie thought it could be an interesting project so she decided to pursue it.

Over the course of this semester, Stephanie has learned that Kent County, Maryland contains some of the highest rates of reported Lyme disease cases in the state and is looking to find a way to determine the level of risk that each property in the county has of harboring Lyme disease carrying ticks. In order to determine the level of risk that a person has of contracting the disease, she is looking at the proximity of the person’s property to a wooded area based on a near to far scale in her data collection.

At the end of this semester, she hopes to have this project completed. The final product could be useful to the community, to make them more aware of the health risks of their area.

Stephanie sees her current position in the GIS lab as an essential step towards her ultimate goal of being a Geospatial Analyst for the National Geospatial Intelligence Agency. She hopes that her experience from working in the lab and her Washington College education will build the foundation she needs to achieve this goal.