The Knowledge of GIS Meets the Hope of Medicine 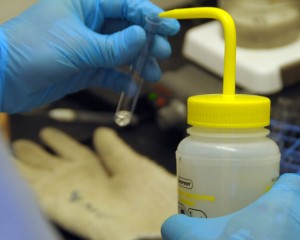 Tyler Brice is among the most recent Washington College graduates as a member of the Class of 2013 and he hopes to use GIS in his career aspirations. Tyler hopes to pursue a career in medicine and feels that he will be able to use GIS to map and analyze information about how diseases move through a population, and find solutions for controlling and preventing outbreaks.

Tyler Brice studied Biology with a minor in Chemistry. He is a Chestertown native who decided to come to Washington College after discovering that the other colleges he had looked at did not fit his needs. Staying in Chestertown has allowed him to live at home, and continue to enjoy all of the outdoor activities Chestertown has to offer.

Tyler says that he first became interested in GIS during his freshman year, when he received an email that showcased all of the work that had been going on in the GIS Lab. He was interested in learning more about GIS, and decided to apply for an internship. While working for the GIS Lab, Tyler has learned to use a variety of software programs, including Google SketchUP, ArcGIS, and Geoweb3D. He says that Geoweb3D is his favorite program so far, because it allows him to use data from ArcGIS to create a 3D scene.

What he has learned about GIS programs has also been applied to countless projects at the GIS Lab through the years, including projects for the Chestertown Historic Society, Queen Anne’s Conservation Society, The Town of Easton and the Jacobus Vanderveer House & Museum. Most of his work has involved using data from several sources to create 3D flythrough visualizations. Tyler’s current project is for the Chesapeake Bay Maritime Museum. For this project, he is incorporating data from ArcGIS and 3D buildings into Geoweb3D, to create a 3D flyover that will show the route from Easton and St. Michael’s Maryland, as it would have looked in 1812.

Outside of the lab, he was the only student to be picked three times in a row to attend the GEOINT Symposium, a conference for government intelligence agencies and defense and technology companies. Attending GEOINT has been a great experience for Tyler, giving him an opportunity to learn about defense and how GIS applies to many different fields. Attending GEOint has also given Tyler a chance to network with potential future employers who will be able to assist him in his goals of serving his community with the knowledge of GIS and Medicine.