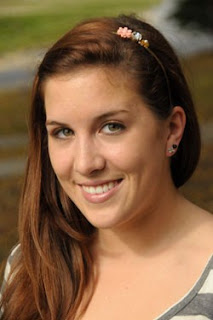 Tara Barber was first introduced to the GIS Lab when she went to the Office of Student Financial Aid to find an on-campus job as a first-year student. Although she didn’t know anything about GIS, Tara found the idea of map making and collecting data interesting. As an Anthropology student, she saw the potential for using GIS programs to map out data about different groups of people.

During her time working for the GIS lab, Tara has learned to use several software programs, including Google SketchUP, Unity, and ArchMap. She says that her favorite program so far has been Google SketchUP because, as an Art minor, she really enjoys being able to use her artistic skills to render virtual models of homes. Tara has utilized her newfound GIS skills on a variety of projects, such as the Historic Homes and Chino Farms projects.

While working on the Historic Homes project, Tara helped Historic District Committees from several historic towns on the Eastern shore gain a better understanding of their towns’ unique characters. To do this, she virtually constructed historic homes in their towns, which gave the Historic District Committees an idea of how the homes would look in relation to the surrounding community. This knowledge enables communities to plan for future growth and improvements to existing buildings, while being sure to maintain the look and character of their historic districts.

For the Chino Farms project, Tara focused on an innovative new process called Nutrient Trading. She worked with the staff at Chino Farms, located right off Rt.213, mapping out the property and creating a digital version of the farm that will allow a user to virtual travel the ground of the farm and explore the industry of nutrient trading. The goal of the project was to give potential business partners and farmers an idea of how the Nutrient Trading process works, and to see how it would affect their land.

Tara’s current project is focusing on a different subject entirely: crime mapping. She is mapping out DUI and other alcohol related offences in the state of Maryland. Tara feels that her experience working at the GIS lab has been very positive. She has been able to do volunteer work in the Chestertown community, working with Garnet Elementary’s after-school STEM program, where she taught students the basics of Google SketchUp and helped them create virtual models of their dream homes. Tara has also made friends working at the GIS Lab, and has found it to provide a positive learning atmosphere.

After graduation, Tara hopes to work in the field of Historic Preservation and Cultural Resource Management. She would like to do contract work or else work for a museum. Tara feels that the skills she has learned at the GIS lab will help in her future career. She has learned to collaborate on a team project, and has learned how to sort through and utilize data. As well as learning about map making; Tara has become efficient in the use of Microsoft Office programs such as Excel. She feels that she has learned a variety of skills that will have real-world applications.