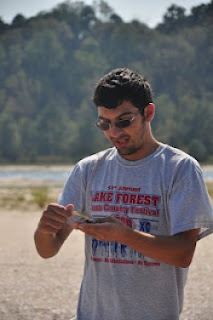 Jeff Sullivan is a sophomore at Washington College majoring in Environmental Studies. Jeff became interested in GIS after taking the introductory course and saw its potential relevance with wildlife management. He hopes that working as a GIS intern will expand his abilities and knowledge of GIS software.

Throughout the spring semester, Jeffery Sullivan has been working on a project both for his job at the GIS lab and as part of his academic school work for one of his classes. GIS Lab Director Stew Bruce teaches a course on campus that Jeff is currently enrolled in. This course, Intermediate GIS with Lab, involves a semester long project in which the students pursue the topic of their choice. Jeffery, after working as an intern at Chino Farms this past summer, decided to compile all of the research previously done at the farm, current research, and potential research focuses into one portfolio. Chino Farms is located just a few minutes from the Washington College campus and has been working with the Center for Environment and Society in order to have interns spend time on the farm conducting research during the academic school year and over the summer.
Click to read more...

This extensive project, with the working title "Grass and Grain: A study of Chino Farms", involves giving the history of the farm, collecting all of the past research from the farm, consolidating current research, and addressing potential research opportunities for the future. Because of the large amount of work that is involved in this project, Stew assigned fellow GIS employee Amanda Kloetzli to work with Jeffery in the GIS lab in order to have it completed by the end of the semester. Amanda is working to digitize the field and stream buffers that will go into the final report. Jeffery is making all of the maps that go along with the research of the farm, and collecting all of the other components for the project. In addition to working on this project as part of his course work, Jeffery also works on it during his assigned work shifts at the lab.

In the beginning of the semester Jeffery was promoted to a Project Manager position at the GIS lab. His role would be to oversee all of the projects worked on in the office that involved Chino Farms. This promotion, in addition to having worked at the farm over the summer, is what led him to choose his class project.

At the end of the semester the final draft of the research project will be printed, bound, and presented to the landowner. When asked about the overall goal of the project Jeff stated, "This will give a nice report for the landowner, potential donors, and potential researchers to see what has been done, what can be done, and the areas of interest to them on the farm."

To learn more about Chino Farms: