Mia, Tony and Sam had the opportunity to go on a ride along with the Prince George’s County Police DUI Team that they have been doing analysis for during the summer. 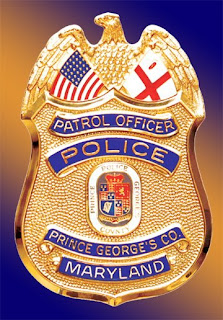 The streets of Prince George's County are not known for being the safest place.  Throughout the night they made several stops ranging from tail lights being out to driving under the influence.  One of the DUI’s involved a drunk man pulled over to the side of the road because his car was out of gas.  Next to him was his sober significant other and an 8 month old child.  Another interesting sight was an individual stopped at a green light due to being high on PCP.  The officers later said that this was just a very “mild” Thursday night.

The most exciting moment of the night for Sam was probably the several minute long (speed limit abiding) car chase with Officer Jesus Yambot, which ended with the culprit being tackled and slammed onto the hood of the police car while he sat in the passenger seat.


For them, it was nice to finally be able to grasp how the ETIX process works.  ETIX are basically electronic tickets instead of paper tickets.  It was interesting to see how they are able to scan a person’s drivers license (providing the barcode on the back is not mutilated which they saw on the ride along) and instantly bring up all their personal information rather than having to physically write it down which can take a long time.

ETIX data is a primary source of data for the MHSO team and sometimes the data is not very accurate or is incomplete.  This causes problems for when they need to map the points or do analysis, and can even add a lot of extra work having to manually place XY coordinates in. Sam mentioned: " I used to not be able to fathom why an officer would leave these fields blank, but after seeing how much technical trouble they have with the outdated computers in their car, I became a lot more understanding."

Lastly it helped the team gain an understanding of the dangerous situations that these officers have to deal with on a daily basis, and the small amount of time they have to react when things go south". He also said: "In the future when I see a news article about a cop who did something controversial in the heat of the moment I would think twice before blaming them for doing the wrong thing".


This experience was a very positive one for Sam, he mentioned lastly: "Becoming more involved in the work that you do is always a good thing.  I could view all the data as just rows of numbers that I need to turn into hotspots, but by involving myself at the root of the process I am able to see first-hand what needs improvement and what I can do in the future to provide them with the best analysis possible.  Also even something as little as building a relationship with the officers you are studying and asking them simple questions such as “what could we do to make you more effective” can go a long way and provide you with information you may not get at a staff meeting".